When the film 50 shades of gray was released, it was called “scandal film of the year“.
Everyone has talked about it, everyone is talking about it, a sensation here and criticism from there, has made record takings but if you ask specifically nobody has gone to see it.
I do, I have no problem saying it and I want to tell you my point of view on the subject.

50 shades of gray a book became a film scandal

I state that I have not read the book, or rather, I started but I did not even get there halfway. What can I tell you, the story didn’t catch me and the way it is written I found it a bit childish, slow and boring. So dumped there. Of the other two books I know absolutely nothing and I have no idea how the story ends (if you want to spoil it, do it as well).
I wanted to go and see the film anyway. I was too curious to try to understand what was so amazing that it literally made many women go crazy, some to the point of getting a themed tattoo.

The outfits proposed in the film

The first thing I noticed during 50 shades of gray, were the outfits used for Anastasia Steele and Mr. Gray created by the costume designer Mark Bridges.
I didn’t find them bad. They clearly help to understand the transformation of the girl after meeting him and vice versa. Anastasia starts from an awkward and very common style to get to wear really sexy and sophisticated clothes. He always impeccable, nothing to say, goes from suits that he never gives up to a more casual style. Their influence on each other is therefore also reflected on their look.
Below I had fun playing some outfits by Anastasia. 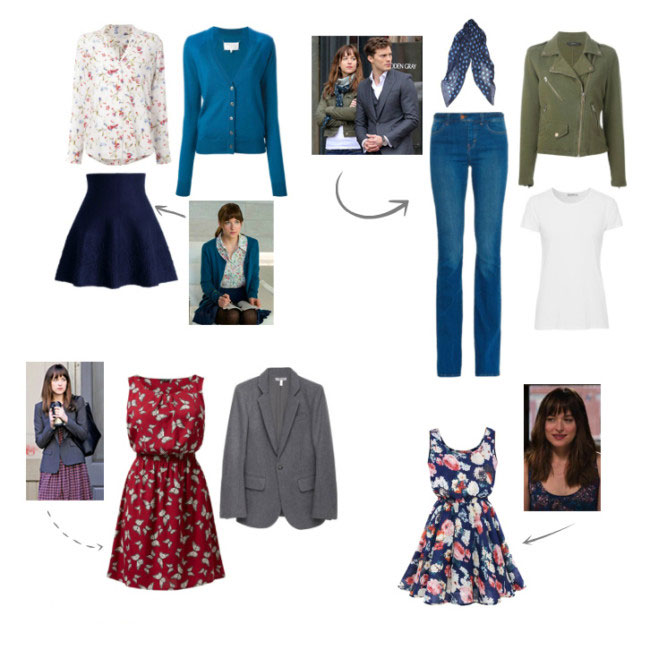 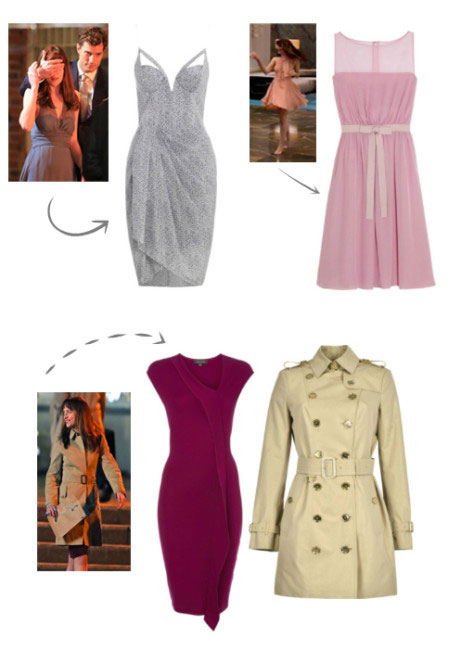 Going back to the film, I have to admit that I didn’t find it so bad. Sure it’s not a blockbuster, I certainly wouldn’t concern it, but it was nice in some sketches where I also laughed. I thought worse given the effect that the book had had on me, despite, after half the film, I began to wonder “but when does it end?“. Other than 50 shades of gray…

Now, as for the various insinuations in which they claim that it pushes women to get mistreated etc. it seems to me exaggerated. First of all because it is well specified that the decision is up to her and nobody is forced to do something if she doesn’t want to. Basically it’s just a way of having sex like there are others. For example, there are people who get excited by being touched by wearing latex overalls, who look at their husband with another, who do it in 3 and so on. With this I do not feel to judge negatively anyone’s sexual choice. Although I personally would never be whipped even with a flower, I can accept without problems, prejudices or free bigotry a film and a book that tell a different sex from the classic position of her below and him above. I don’t see the need to consider it a scandal as some journalists or women’s associations have done. I specify that in the film there are not even too much scenes.

A film that really influences women?

As for the female reaction in which they say that after 50 shades of gray, the women all go home to the husband/partner/boyfriend to get three of everything done or the singles to look for men like Mr. Grey makes me laugh. I believe that if you are a couple and a film or a book has been enough to make you change the habit of the missionary you have always practiced, the problem is more relative to yourself and to how you lived sex and not so much to the story told in 50 shades of gray. Either you didn’t know there was anything else or nobody was good enough to let you know what you really liked.
On the other hand, singles, who now want the man to Mr. Gray, are only the classic women who want him rich and powerful. There have always been and it is the oldest story in the world. If it is from the point of view of how he has sex he is nothing more than a legitimate curiosity to be able to find a man with whom they feel free to try everything. Or they simply do not have a strong character and prefer one of those men capable of always keeping the situation in hand.

50 shades of gray is a story of love and sex as many, each has its pleasures

In conclusion, always in my opinion, everything ends up on the psychological level of each individual not so much in history per se as they want us to believe. They are condemning a story just because talking about sex is still a taboo subject in the 2000s. Anything that is not part of the same common thinking is labeled negatively; if you did not like it you are a nun, if you liked it it means that you practice those performances with your man. It would be enough to see things more broadly, take them lightly and be objective. It is a love and sex story like any other, maybe just like yours.

Have you seen it? What do you think?

My Pandora story begins with the camera charm

10 fashion curiosities that not everyone knows