Thoughts and words: we all wear a mask

We all wear at least one mask regardless of the period of Carnival, Halloween or anybody. And to think that in Latin the word “person” meant “theatrical mask” to indicate how much the real personality of people is hidden under a disguise.
Today I left my hands free on the keyboard. Free to flow behind thoughts and words. No fashion but only a succession of often repetitive phrases. Maybe meaningless for those who do not share aspects of it but who I did not want to touch up. Let stand still, helpless, imprinted like this. Natural. I think they talk about what can be behind a mask. I don’t know if it’s a story, a story or just a confidence from someone seen from the outside but I didn’t want to delete them. Indeed, I published them. That each reader interprets them as he believes. Make it yours if you prefer or see further. It does not matter. He has none for me.

A mask and you, you are a mask

She is that “uncomfortable” I would say.
The one that arrogantly and arrogantly tells you things in the face even if it knows how to hurt you and even does it on purpose.
It is the one that puts awe, the bitch and selfish that has no sense of guilt and if it apologizes eight times out of ten it is because it has to do it and not because it really thinks so.
She is the snobbish and haughty one who does not calculate anyone but when everyone passes by they have to whisper something.
But this is just a mask, a titanium mask that was put on by people, by those who never really got to know it. The same people who tried to approach her, maybe, but she wasn’t allowed that much. And you are fine. She likes this mask and has been wearing it for years with extreme bravado, I dare say. Even if sometimes he finds himself not even knowing who he really is.
She is the insecure one in reality, the one who always feels out of place, never in the right place at the right time, able to stumble over a grain of sand, clumsy and a little child in her mistake, always asking why.
It is the one with the metallic blue eyes, which loves the four cheese pizza, the Little Prince, the white tulips, the Disney movies, the smiles given away and laughing. Laugh out loud. He lives on coffee, he dreams of superheroes who take her away and he always has the music in his ears to not hear the din of the world.
She’s the one who really loved only once and knows she won’t love anymore. At least not in this life and that way.
It is the one with the slightly crooked smile that always bites her lip and stares you in the eyes to read you inside but this nobody notices.
She is also the one that allows everyone to get closer but as soon as she realizes that a person could have the key to her secret garden or in any case be able to climb over that wall she moves away. He doesn’t ask himself why, it just happens. Then he cries with anger and not suffering. Being around her is extremely difficult. It takes courage and awareness.
She is the one with the perennial fear of letting go, letting herself be discovered and known more than necessary, more than her comfort zone of protection can allow. He hides perpetually behind a mask and what he is not, but nobody understands him. Impossible to surprise her.
It is the one that in the evenings reads books or writes without pause pages and pages of a story that perhaps has lived, or maybe not, but nobody has ever read anything.
She is the one who gets excited by the small unexpected gestures and those little attentions for many insignificant as long as she perceives they are sincere and only for her.
It is the one who always has a good word for everyone but no good word for herself.
She loves writing, writing, but she does it between the lines even though she herself cannot read between the lines. A bit like saying “love me but without touching me”.
She is the one who was born alone and will leave alone, leaving a big mess to whoever realizes she has lost her.
This is you and maybe I am a bit too…

Phrases and quotes on masks

Remaining on the subject of masks and considering that it is a subject on which one could quibble for hours, I selected the best aphorisms capable of making us think. Whether we want to admit it, accept it or not, each of us often wears a mask. There is only to understand why he does it and if, or when, he takes it away.

No person can succeed in wearing a mask for himself and another for the world without ending up confusing them, not knowing any more which one is the real one.

Sometimes I wear the mask of happiness not to protect myself, but to protect the serenity of those who love me.
(Anonymous)

A mask does not hide a face, it hides a wound.
(Miguel Ángel Arcas)

You will learn at your expense that in the long journey of life you will encounter many masks and a few faces.
(Luigi Pirandello)

We live in a world where virtuality dominates, a world of masks, appearance and fiction. The great purpose of life is to find reality again.
(Fabrizio Caramagna)

We know how dangerous a mask can be. We all become what we pretend to be.
(Patrick Rothfuss)

We are so used to masking ourselves in front of others that we end up masquerading even before ourselves.
(François de La Rochefoucauld) 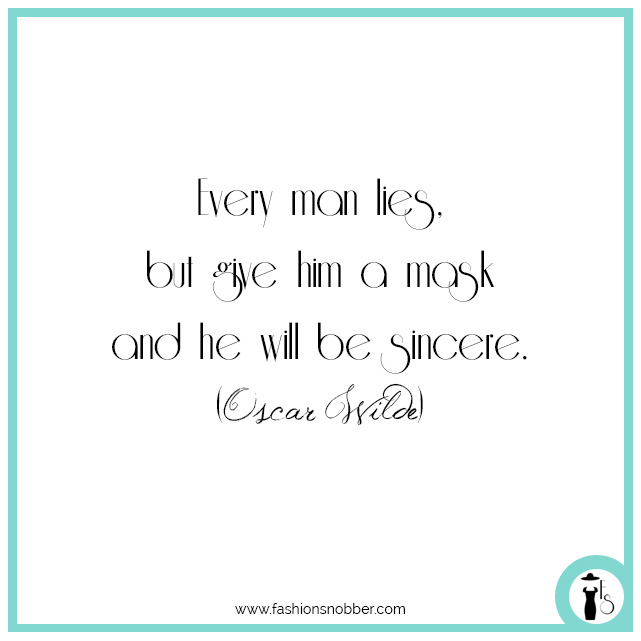 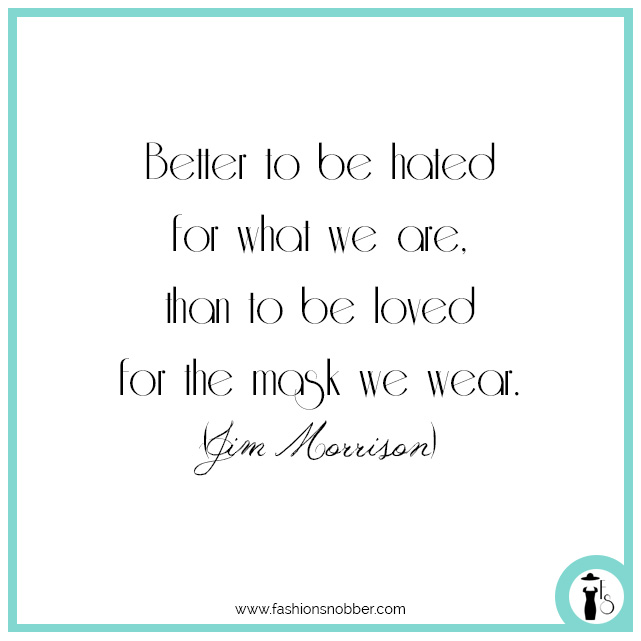 “I am just what you see” says the mask, “and, behind it, what you fear.”
(Elias Canetti)

Love 2.0: at the time of Ferragnez everything is allowed

All the best fashion films to watch at least once

City VS provincial village, where is it better to live?