Yes, I know, now you’ll have boxes full, we have already spoken in all the “ways, in all places and in all” lakes since they started to depopulate the summer of 2011 and could only be found in its namesake store Forte dei Marmi. Since then they have come a long way. The Cruciani bracelets macramè lace have become iconic and still do not know anyone who did not have it at least one wrist, yes, even among those who now despise him because he got tired of seeing him in many different ways.

My mother is now desperate, the other day he even asked me if I’m going to tatuarmene one (and the idea would be not bad at all) because if this continues I will have no more space on the arms to put them. But what can I do? It is not my fault if they are totally dependent on these bracelets almost like the coffee, and, whenever one comes out, incidentally, preventing characterizes me to let him in the store.
Each with its importance, each with its own history. And I love every symbolic thing that ties me to a hidden meaning. It’s part of me. ((Like when I told myself through the Pandora bracelet.)
The first bracelet, for example, do you remember? (Trivial and pointless question.)

“A desire for each four-leaf clover, clover leaf for every wish.”

Is there something more meaningful that encompasses everything you want in a sentence or a symbol? Nope if you tell me I would not believe it either.
Do you think they are so sick I always have a couple in a gift box at home ready to make little thoughts on the fly when I want to surprise someone with a small gesture. I think there is not anything cheaper but effective as the four-leaf clover bracelet Cruciani.
I got them almost all, someone has broken, others have lost them, some other change it at will while some do not take them out until you crumble it yourself. And each closing node make a wish, just like usual to do with cotton ones you buy at the beach. In short, I load them with all my dreams, desires, hopes and memories just like I do with the shooting stars.
I’ve had up to 8 on the left wrist and 3 in the right. In the left a general mixture of meanings while the right I have the superheroes section. Already, I am very nerd you caught me, but superheroes in some way help me to make me feel more human. Just saying.

Bracelets Cruciani, mania or phobia? For me mania 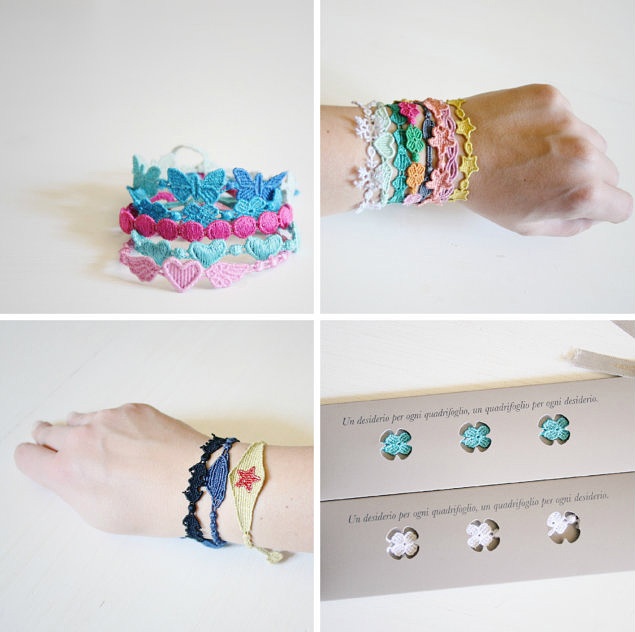 Among the latest out I really like these 5. But have no doubt, will be my very early…

1. We World. Baby pink to give my contribution to this Association. In order to help mothers and children more vulnerable. I love it when a brand creates an important leader and evolves the proceeds homonymous Association that gives its name to the product. Cruciani did often. For the WWF, for the various types of cancer, AIDS, Telethon and so on.
2. Mercury by Mariano di Vaio. Finally a male model to be able to give to my husband in Blue Navy with which is never wrong.
3. Zodiac. Dove gray because the virgin is an earth sign. (No joke about my zodiac sign, no, they are not, it is quite obvious since I have not had my son by holy spirit! ;P).
4. Mickey Mouse Lurex. Color Ocean Blue I love Disney and a dreamer like me can not help it.
5. Rainbow. Limited edition to celebrate its first four years. Simply divine.

And for you? Cruciani mania or phobia?

How to wear a white shirt in 10 different styles

How to tie sneakers shoes in many different...

Oh, how could you not love them ? ! Whenever I wear mine, all I get are compliments.