Style icons: of yesterday and today, who and why

We all have our style icons. We all draw inspiration from someone. You have to be good at it and not fall into imitation. We don’t have to become a photocopy of someone. We can take inspiration from their styles as a starting point to help us understand what we like and what we want for ourselves.
I have several, I never refer to one. Before inserting them into my sources of inspiration, I followed them for a long time, I studied them, I got informed in my small way not being able to know them personally and in the end in my opinion they really are the best dressed and almost always impeccable women all over the world. Refined, elegant and classy even when wearing a simple t-shirt. Feminine, sensual and know how to show themselves as girls next door even though they are not. Some have never been from birth, others maybe, but life has taken them elsewhere.

Style icons: who and why

First of all, it is useless to talk about Audrey Hepburn (actress), Coco Chanel (stylist), Grace Kelly (actress and later princess) and Jacqueline Kennedy (37th American first lady). Almost “discounted” in their immense popularity and for all they are unquestionably the basis of impeccable elegance. That they are from past eras does not matter. Nowadays and in millennia they will always be considered the greatest style icons of all time. For this reason they deserved a single article for each of them without having to talk about it in three lines, summarizing too much their importance in the history of fashion.

Today I want to talk about today. Of those from whom I take an example and dream of being able to have even a modicum of their class. Not only in the look but also as ways of doing and putting oneself on most occasions.
In alphabetical order to do no wrong to anyone and without prevaricating or criticizing their choices of private life. I just analyze their style and explain why I like them and have entered my style icons by right.

Lebanese, born in 1978, a lawyer, he reached the height of his fame by marrying the actor George Clooney. I like it because it varies, plays with multiple styles and very rarely has it worn something that I personally didn’t like. He smiles, it’s natural and never set. Dowry of few style icons. 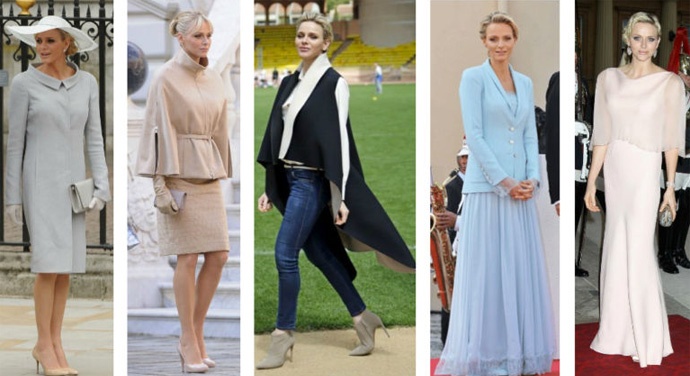 Born in 1978, former swimmer and model, became Princess of Monaco for having married Albert II of Monaco with whom he had twins. Nicknamed “the sad princess” for obvious reasons, makes me so tenderly and its classic and often essential look like regardless of its air. It prefers neutral or pastel colors. Rarely I saw with eccentric clothes or fancy and very often in camel and beige. Sets its shoulders swimmer very best of our Martina Colombari.

Born in 1982, Duchess of Cambridge, wife of Prince William with whom she had 2 children. The Princess par excellence of today with a true love story to tell to the girls and the eternal romantic dreamers. Beautiful, sweet, helpful and always perfect. He often wears the same garment in multiple official releases and I like this thing very much. At least he tries to convey the idea of being like all of us. It varies in colors and patterns, always managing to keep the same style line. Mainly bon ton and preppy, for this I love it deeply, perhaps more than all the other style icons. One of its peculiarities is the refined posture and its way of holding both hands in front of the belly both in a natural position and when holding a clutch bag. 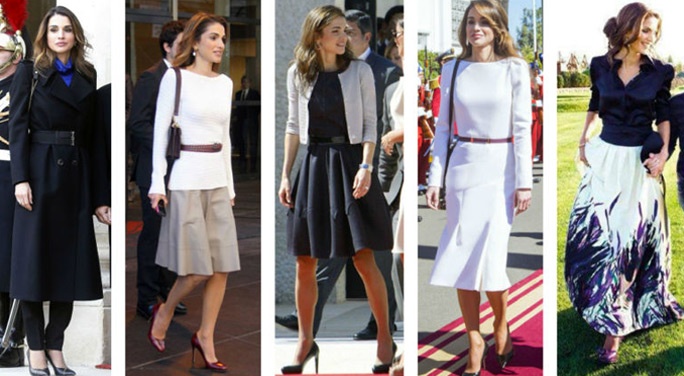 Born in 1970, graduated in Business Management, she became Queen of Jordan after the ascent to the throne of her husband ‘Abdullah bin al-Husayn, with whom he had four children. I admire her for her innate grace and esteem for his constant struggle in trying to improve the status of women in Islamic countries. His style is sophisticated and modern while drawing when needed its origin and his religion. Its characteristic is to emphasize the waist and when it is not the habit to do it always enhances with belts or sashes.

I mention it but it is not among my absolute favorite style icons because it does not always convince me 100%. Born in 1986, graduated in philosophy, second daughter of Princess Carolina of Monaco, passionate about horseback riding and test tube rider, engaged to the actor Gad Elmaleh with whom she had a son.
Unfortunately, I have often nagged towards him. I think he has identity problems with his shoes and reluctantly I have not loved his outfits many times because of the choice of the latter. She is beautiful, worthy heir of the big names behind her grandmother and mother. He often wears Chanel and Gucci, of which he is also a testimonial. I like his eternal adolescent air, his continuous search for freedom and when he does not experiment too much with trends but remains firmly in a casual chic look a little preppy if we want. One of its peculiarities are the eyebrows always thick and evident as it is right. Never too thin or designed with that sense of fake.

Modern style icons are all princesses

Mostly they are all princesses, no singer or actress, I realize it. Today as today I have not yet found any contemporary star that can define and integrate among my new style icons. Unfortunately, I believe that the kind of woman who inspires me is totally losing and remained right in those circumstances that still have to do with realms and the like. It is not a good thing and I hope that one day this kind of behavioral education and look can return to be the starting point for anyone’s education. Too many times I am ashamed of what we are becoming. But remember that you can improve. You can always. It’s up to us to make a difference.

And you? Who are you inspired by? Maybe you could let me discover new style icons.

Motivi and the collection Made on Me

Your favorite color tells you who you are

Tell me how to wear the bag and...

All (or almost) the beautiful fashion styles