Our first 5 years of “We Eternally”

As our faiths say: “12 June 2010 Eternally We”.
Today 12 June 2015.
I remember every emotion like it was yesterday. And yet things have happened in the meantime. The most important is certainly the birth of Spruzzetto di Sole in September 2011, our little brat.
But today we celebrate Us.

It was a hot day in mid-June when we said “Yes”, then “Yes” that has made us a family. That “Yes” in which few now believe in. “Basically it’s just a signature…” Too often is told. But I that day I dreamed I was a child, when I used to play in elementary school with my boyfriend at the time and that became white pinafore white dress par excellence.
And then the party to have fun and be together. Yes, a party, not a ceremony. There is its difference. Yes, because I had my own ideas and my “fixed” for that day. For my wedding no clothes in shiny fabrics that hatred and I find inelegant; nothing veil because I consider it a mockery against those who still believes in the religion of this country and the fact of getting there virgin (and who now comes to us more?! Already we allow the white dress!); nothing photographers insistent that I put every two seconds in ridiculous poses for a book from the crazy price but the best photos taken at the event, of course, most real meaning of thousand pictures contrived; nothing lunches in challenging locations that force to remain “in the ranks,” better a mega party dall’aperitivo dawn in a garden with loud music.
In short, my marriage had to be special, different, away from the usual “rules” of the others.
So I found myself invite representatives a watercolor depicting me and my husband that we run in a meadow with a simple phrase:

“Together to be happy…“

The favors made by me in heart-shaped boxes with inside two pink quartz and attached a little poem with the explanation of the different meaning for each type of guest.

Greetings in the newspaper from our dogs.

Received greetings on papyrus by the Pope, too bad there was Francesco at the time.

The arrival of my husband and friends in motion.

A marriage of the afternoon in a tiny church in one of the most beautiful towns of Tuscany, Bolgheri.

The party organized in the garden of candles, white roses and dj.

Catering super organized and youth with barman, donuts and croissants at 3 am.

The table of confetti all possible and unimaginable taste.

A huge cake of three floors, white, simple and surrounded by flowers.

The launch of the lanterns in the sky with written on our date (I wonder if then someone found them and who knows where).

Then a video, but not the classic video that would send all our photos, but a video with images of the film under the Disney song Jovanotti “Kiss Me Again” with the final phrase “A kiss to you that you are one of the wonders of the world” and not for us, but for the guests.
Yeah, I know that was our day, but it would have been without all the guests that day after day we have lived with our history, our love, we have believed. The minimum was to pass to them a good time to make him feel important. So a nice party with scents of jasmine, oleander, roses and olive trees. 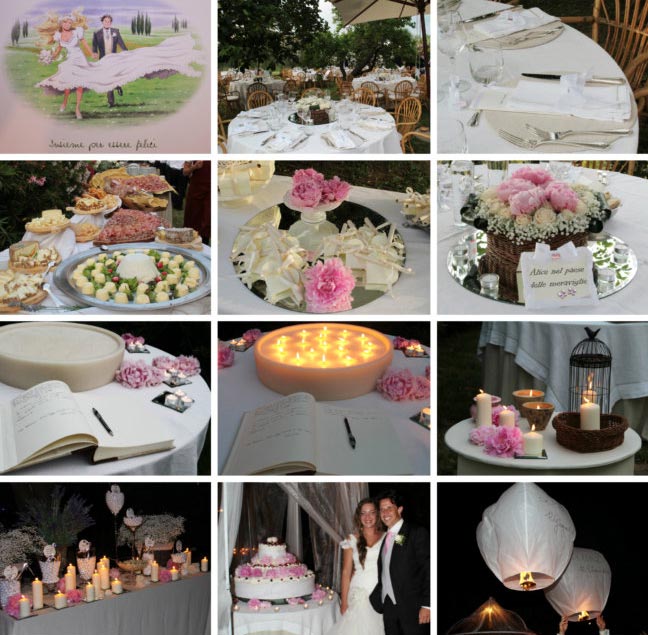 And I think I would marry again tomorrow to relive everything, to do it all.
I also think that nothing has changed since then, we’re all right, even more, and I hope to get to ninety so. With the same emotions, with the perfection that is given alone and simply by our love, by live 360 ​​°, by our being together. Even when we fight and anger butteremmo all away, but then we realize how lucky we are to us and everything passes.

And so we arrived at the first 5 years of “Eternally We” (these words taken from a letter of Ludwig van Beethoven for his anonymous “immortal beloved“).
5 years flown.
I have nothing to complain about and no regrets. True, we are still at the beginning, the years ahead are still many (I hope) and the habit sooner or later will creep if we are not good enough to prevent it, but for now we’re still here. In the face of those who thought I was not a “girl from marriage”, in spite even of myself that I get bored easily, and the monotony of a second he did always get away. Oops, now I can say “was.”
Me and him. He and I.
Still here as if it were the first day we met 15 June 2007.
In that room, with those two friends in common and that cocktail convict named vulgar. Rum Culer the first word I said. Romance zero, so many laughs.
That’s right, just like that first time, when meeting us by chance, fate surprised us. Because that’s how most of the time it happens. By chance, with a look and a smile. When you least expect it and, perhaps, even now when you think you’ve lost everything.
Five years in which our watchword is surprising, always inventing and recapture every day. For now works. We work for.
And for today, Happy Birthday to Us.
And thanks to you.
Thank you because you always know when to be silent and when to just keep your hand. For forgiving me for not being your “past”, but know that by five years of marriage and 8 of the report are and I will definitely be your future. Thank you because your passion is beautiful, a reassuring and your caress your kiss, your smile, your own little surprise are the things that remain and make happy my life with you every day. Meeting was definitely a spell, but will not lose our true story…
And again this year we can say…
To be continued…

Season change: how to (re)order the closet

Great story. Happy Anniversary. I wish you many more years of bliss. http://fashionablyidu.blogspot.com/

Thank’s so much! We hope it continues like this, we commit a lot. :)